At the base of the Taracoles river, roughly fifteen miles north of Jaco Beach Costa Rica lays the Carara National Park, also known as the Carara natural reserve.

Widely regarded as one of Costa Rica’s most prized ecological treasures the park is home to an incredible assortment of rare and exotic plant and animal life.

The Carara biological reserve is perhaps best known for its wild and incredibly diverse bird population. Bird watchers vacationing in Costa Rica would be well served to pencil in a day trip to Carara National Park as part of their itinerary, as this national treasure would likely serve as the highlight of any Costa Rica birding vacation. 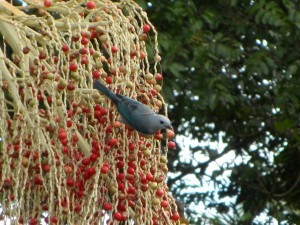 When touring the park one can hope to see a laundry list of exotic birds, including but not limited to woodpeckers, parakeets, motmots, jacamars, trogon, heron, egret, Smooth-billed Ani, and of course – scarlet macaws.

The scarlet macaw is the main draw for Carara park, as the reserve serves as one of the most extensive remaining habitats and breeding grounds for the fabled bird in all of Costa Rica. Over 150 scarlet macaws make their home inside the Carara biological reserve. Carara National Park is not just for the birds though, figuratively speaking.

This biologically great area is also home to a litany of other spectacular animal life including capuchin and howler monkeys, two and three-toed sloths, red brockets, kinkajous, and a variety of amazing reptiles including several rare iguana species and the infamous poison arrow frog.

Being primary rainforest, the Carara National park is also worth a trip alone just for the staggering assortment of plant life, including thousands of fantastic plant and tree species.

From volcanic rock to think rainforest canopy, from massive crocodiles to tiny lethal frogs, banana trees to orchids, screeching monkeys to sloths, stunning indigenous butterflies to good old mosquitoes and everything in between, this place has it all. Luckily Carara Biological Reserve is one of the many Jaco Beach activities offered by area tour companies, and the park is only a short trip from downtown Jaco.